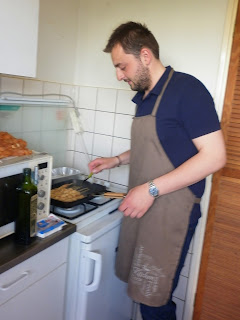 Some people ask me how I get so many to people to cook for the blog...mainly they are my friends. But occasionally I meet a friendly soul in an unlikely place, and in the case of Andreas it was on the bus. When I heard he was Greek and lived in Delft, I casually asked if he enjoyed cooking - and unsuspecting of my ulterior motives he mentioned that he often whipped up feasts for the other Greek students in town on the weekend.
Well, the rest is history, and I have been invited over for an ambitious spread. As I arrive at the flat where Andreas lives with friend Yannis, I notice literally all of the available windows and doors are wide open to allow the smoke an escape route. 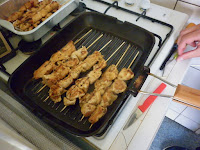 They are grilling up an incredible amount of souvlaki, and I do not really see how we are ever going to finish all of it with just six guests in total. While my last meal (Swedish) involved mainly early music fiends, today they are all engineers. Andreas and Yannis are both electrical engineers, specializing in sustainable energy, and confound all expectations of nerdiness I might have had. Their gorgeous friend Anna Maria is doing an MSc in geomatics, which is something with GPS satellites and GIS. That is roughly all I could tell you about it! 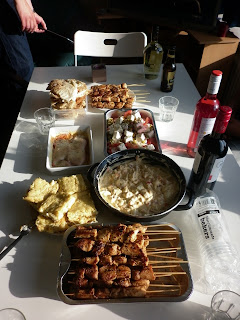 As we are getting to know each other in the kitchen, cold beer in hand, Andreas is just putting the finishing touches to the last skewers of chicken souvlaki (σουβλάκι). In total, the meal comprises an astounding seven dishes. More of our feathered friends in the chicken salad with peppers and eggs (κοτοσαλάτα); the iconic Greek salad served worldwide (ελληνική σαλάτα); some courgette pie (κολοκυθόπιτα); bouyiourdi (μπουγιουρντί), and grilled spiced flatbread. To top it off, some completely authentic dessert: a tasty though not very photogenic mix of Nutella, Maltesers, biscuits and whipped cream.
Two of the dishes include feta, which I adore. As chilled cubes in the  Greek salad and melted in the bouyiourdi (spicy baked feta with tomatoes). Apparently there are many other Greek cheeses that I have not heard of and are equally delicious, so I should probably just do a little culinary tour of the islands sometime soon to try them all! 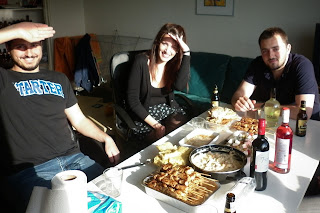 See the photos for the complete effect of all the dishes set out on the table. Andreas has had some help from his flatmate, Yannis, a good friend since high school (on the left in the photo at left). They both share a laugh at the initial shock of hearing non-Greeks creatively pronouncing the letters of the Greek alphabet...a common occurrence if you are studying in a field which involves a lot of physics.
Though Greek politics and the economy are in what can safely be described as a somewhat chaotic phase, we only touch on that briefly. They do clearly realize that they are in a privileged position, as engineers can find a job relatively easily both in Greece or abroad. 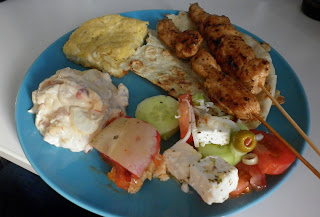 We soon switch to somewhat lighter topics, and Yannis confides that he has never even attempted to 'pull' a Dutch girl during his time in Delft. Admittedly, there are not that many females in the field of electric engineering, but his point is that he feels more at home with Greek or other Mediterranean girls, with whom he has more in common and there is less of a 'relational culture shock.'  I have heard these sentiments from a few other people, though over the course of this blogproject have also met dozens of happy and durable 'intercultural' unions...my  own parents amongst them!
After dinner and tidying up, we take a little walk into Delft town centre which aids the digestion of the copious amounts of delicious food. What follows is a first in the history of this blog, I believe, as we follow up the meal with a typically Greek night on the town, listening to Greek classics mixed with some modern beats by DJ Andreas in his favourite hangout, a trendy new bar/restaurant called GRK & ZO. It might be self-evident that significant quantities of ouzo (ούζο) were involved!
Very thankful to Andreas and his friends for making this such a special and complete experience.