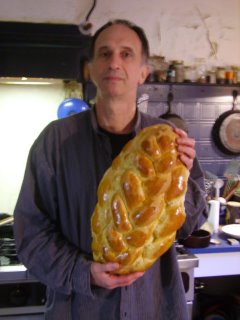 Tonight's meal is special, because my own father, Walter, is the chef! My mother, Lexa, gave the project a kick start by making Dutch stamppot, and now it's my father's turn to show off his skills. I think you will all be impressed by the enormous challah he made. This braided white bread is a family favourite, and has seen many variations. Lexa usually does the braiding, and has made challahs with more than 3 strips, round challah, and has even made letters with the dough. The challah at right is a classic, though. The bottom layer consists of 5 strips and the top one of 3. The beautiful shine comes from the egg yolk glazing that is applied with a brush.
Walter has given much thought to what to serve for a "typically Jewish-American" meal. Of course, what is typical depends on family history, so he has chosen dishes that he knows from his own family, which has Russian-Jewish roots a few generations back.
As a starter, raw herring, chopped liver on matzes, and Walter's home-made pickles are served. You could say these are an "acquired taste", as not everybody will enjoy the distinctive flavours. My own favorite is the pickles; nice and garlicky. 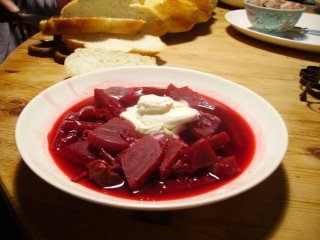 The main course is borsht, a recipe that some people might associate more with "Russian" than with "Jewish-American". The beet soup with beef and onions is brought to taste with sour cream...for those who eat kosher this would be a no-no, as you are not supposed to eat meat and dairy products together, this would be "cooking the calf in its mother's milk".
Another rule is not eating pork (a dietary rule more religions have in common). Walter actually doesn't really have a problem with eating pork, but in college the meat served was usually so disgusting, he decided to tell the cook he was kosher. In a dorm of about 50 people, only 2 people ate kosher. This meant the cook would have to pay a little more attention to the kosher meat, and it tasted somewhat better than the pork served to the other students. Walter confides another trick for surviving dormitory food is developing a taste for hot sauce and horse radish, to mask/improve the taste of what is served.
No need for that with this delicious soup. I dip the buttered challah in to soak up the liquids, then start on the cooked beet and beef cubes. Once in a while I bite on a whole pepper kernel, left in "just to make things exciting".
My dad jokingly suggests I take a photo of him peeing in the bath tub, to show how beets make your urine red, but I decide not to take him up on his offer... A discussion follows on the effect of asparagus on urine's aroma, and I am glad I already finished my bowl of borsht.
Looking forward to dessert: blintzes! These thin pancakes are a bit like French crepes, but are 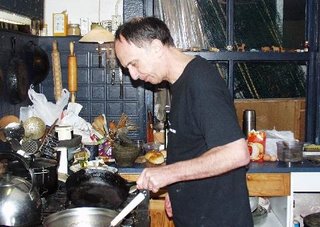 always -as far as I know- filled with a sweet cream cheese mixture. They are not very hard to make, but you need some "pan-handling" skills to get the crepes perfect. Here's a photo of Walter concentrating on flipping the frying pan just right.
There's a joke he often tells when blintzes come up in a conversation:


Moshe is a poor carpenter doing a job at a rich Jewish family. One night, he witnesses the wife making blintzes for her husband. It smells and looks so good, that when he gets home, Sam says to his wife: "Sarah, why don't you make blintzes for us? That's what they were eating at my employer's house and it looked really good!" Sarah answers: "But Moshe, we don't have any butter...you need butter to make good blintzes!" "Ach, Sarah, you are such a good cook, I am sure that you can make blintzes without butter!" "But Moshe, we don't have eggs either..." "Sarah, you are such a great cook, I know you can make blintzes without eggs!" In the end, Sarah does her best and serves the butterless, eggless blintzes. Moshe eats them and muses: "Hmmm, I really don't know why these rich people like their blintzes so much!" 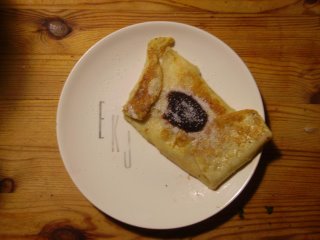 Well...I guess it's funnier when my dad tells it!
We top the blintzes with homemade blackcurrant jelly (blackcurrants from Walter's garden), and after two of them, I am completely stuffed. It's especially the cream cheese inside that makes it so filling.
The nice thing about the photo at left is the plate, which used to be my grandma's: in a way the inspiration for this meal. The EKJ (somewhat deteriorated by our dishwasher) are her initials. The plate was a wedding present made by her father, who was a first generation immigrant to the USA. We even have an original photo of him painting ceramics in Russia (now Ukraine) -and another of him serving in the tsarist army with a big fur hat...