It has taken a few cancellations before I really find myself at Alessandro's place. He's a young piano tuner from Conegliano, a small town located about 50 km from Venice. Just by looking at him, you wouldn't immediately know he was Italian...his hair and skin are pretty light and his eyes are grey. As a child, people would call him "the little German boy" because of his white blond hair. 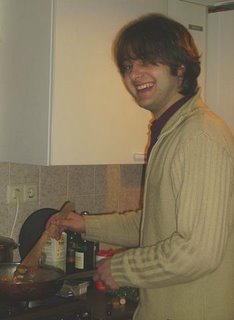 When I arrive at his place at around 6:30, he is still undecided about what to make. His all-time favorite recipe is pasta with dried horse meat and radicchio di treviso, but those ingredients aren't readily available in the Netherlands. He could make polenta or gnocchi, but both recipes take more than an hour to prepare, and after discussing all the options and googling radicchio, I'm kind of hungry. So we agree on pasta with shrimp and zucchini (a.k.a. courgette/eggplant) sauce.

Off to the supermarket to buy the ingredients and some wine, Italian of course. Actually Conegliano hosts the oldest wine school of Italy, and maybe of Europe, I'm not sure. These kind of facts you only know if you are from the city itself. I always thought everybody knew Leiden was the oldest university in the Netherlands, but no...and what about Utrecht having the highest church tower?

While Alessandro is cooking, he tells me a bit about food in Italy. He lived with his mother till he was 26, he then moved to the Netherlands. This is actually a common situation there; you live with your parents till you marry or move to another city. Though Alessandro would 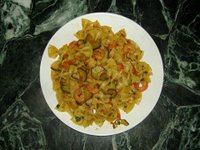 sometimes cook for himself, he preferred having his mother cook for him. As by miracle, his mobile phone rings while we are talking about this and who can it be, but La Mamma.
They briefly discuss the weather in Utrecht and in Conegliano, his buying a new car and his work. Then he has to ring off, because else the farfalle will no longer be al dente! Pasta that is too soft is a cardinal sin in Italian cooking. Alessandro also begs me never to commit another sin, which is to add cheese to a sauce with seafood in it. He once saw a British cook do this on tv, and still horrors at the thought.

Then we sit down with our plates on our laps and enjoy the slightly spicy pasta dish. The sauce contains shrimp, zucchini, onions, garlic, white wine, lots of parsley and one dried chili pepper. The two garlic cloves are only crushed, not chopped, and removed before serving the meal. Thus only a subtle garlic aroma is added to the flavor of the sauce.
After dinner, we have some Viennetta, an ice cream product actually developed by a Brit...but who cares, it tastes fine. During our meal, Alessandro's housemate walks in, Elvir, an artist originally from Bosnia. I start telling him about my 80 meals project and he is very enthusiastic; it seems like I have a new nationality willing to participate! 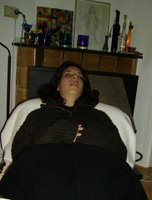 Somehow it is already midnight when they decide to watch a DVD with their beamer. My chair is so comfortable and my eyelids so heavy, I don't manage to stay awake once the movie has started. One and a half hours later I wake up suddenly and see the final scenes of the movie, Caligula. Lots of blood and gore, and I'm happy I slept through most of it. Checking out the description on the box confirms this. It seems to be some kind of bloody, soft porn cult film about the crazy Roman emperor, made by Italian director Tinto Brass.
My camera was still lying on the table after dinner, so sneaky bastard Elvir made a flattering portrait of me snoring away (at left). Kind of scary, huh?