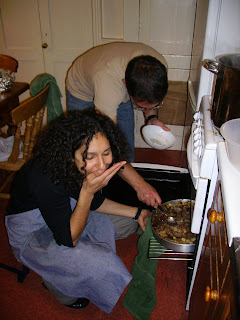 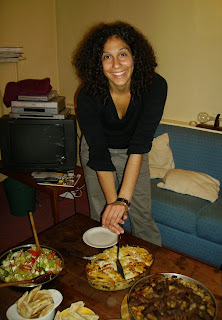 Maria, a social psychologist, has gone to great lengths to provide an authentic Greek Cypriot meal. The email with recipes solicited from her mother and grandmother is stuck to the fridge. For expert advice on the desert, galactoboureko, a visit was arranged to a local Cypriot matriarch. Maria's compatriot, Yiannis (at right), is helping out - the local matriarch is his auntie. In total, seven people will be enjoying this feast tonight, including Pascalis, a Greek friend who can help separate the typically Greek Cypriot from the plain Greek dishes. 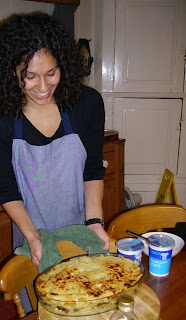 We start off with pita and haloumi, a lovely cheese that is probably Cyprus' most famous export. Maria tells me her grandma prepares this every morning as breakfast for her grandfather.
In general, most Cypriots prefer to start the day with something a bit lighter, such as frappé.
Pascalis immediately informs us that this cold coffee beverage was invented at the International Trade Fair in Thessaloniki (in 1957). So now you know the origins of this famous frothy drink!
The main course consists of Makaroniatou Fournou (a pasta dish with bechamel sauce), and Ttavas, made with beef and tomatoes. Both are oven dishes and preferably cooked in an authentic mud oven in your back garden.
As we all dig in and enjoy the hearty fare accompanied by a feta salad, I try to find out more about Cyprus. For example, what drives the economy? "Tourism!", answers Maria, while
Pascalis laughs: "Money laundering!"
Cyprus has been through a lot...Maria's synopsis is that it was ruled by the Ottoman empire who sold it to the British Empire in the late 19th century. In 1960, Cyprus gained independence after a number of years of protest against the British rule.
The first president was an archbishop and remained in power for 17 years! For some reason, the second candidate was a psychiatrist... and since early 2008 the government is leftist.
But Cyprus is most well know for the division between Greek and Turkish territory. Maria has been to the Turkish part quite often, but Yiannis never has. He does feel it is part of 'his country'. Though the situation is far from ideal, it is relatively peaceful, with no fighting or terrorism, and according to Maria, many people are alright with the current status quo.
Besides the locals, Cyprus has seen an influx of British expats who enjoy the climate and the relatively cheap property.
As well, I am told there are now quite a few "Russian artists". This is a polite euphemism for prostitutes...so even a Polish hooker would be referre 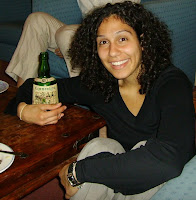 d to as a "Russian artist"!
Similarly, the many domestic helpers are known as "Sri Lankans", though they might be from the Philippines, Malaysia, etc. Maria tells me it is now so common to have help from overseas, that her own mother, when spotted cleaning by the neighbour's help, was asked:"So...where are you from? Sri Lanka?"

We finish off the meal with the lovely Galactoboureko pudding and sweet Commandaria wine, brought over from Cyprus by Maria's parents during their last visit. You can see how much fondness she has for this wine at right.

Here is the recipe for Ttavas, the beef stew.