Tonight the first African meal on this blog! Nejla is a scientist at the biomedical lab where I'm an intern at the moment. She has given me simple tips that make a big difference. For instance, she advised me to use post-its to rubricize my enormous stack of articles. Now I can quickly find the one I'm looking for.

When I arrive at her home in Wageningen, a bit early, Nejla is still video-chatting with her sister, who lives in the United States, but she welcomes me warmly and quickly signs off. 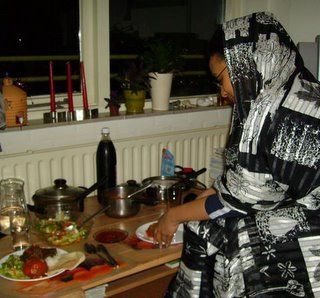 She tells me the other friend she invited, a girl from Kenya, has cancelled. One thing Nejla certainly appreciates about the Dutch is that they stick to their appointments. Once they say they will do something, they do it. I know the Dutch, or maybe "Northern Europeans" in general, have trouble adapting in other countries where people will say yes to something and then not show up. On the other hand, a Spanish guy I know complains about how in the Netherlands, everything is planned a month in advance and no space is left for spontaneous get togethers.

About the meal, Nejla tells me that she actually hardly ever makes Sudanese food. Partly because it takes hours to make, and partly because she likes it so much, she can't stop eating it once she starts! 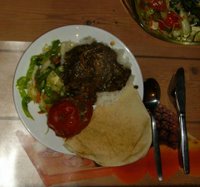 The menu for tonight is a Molokhia (a spinach like vegetable) with lamb meat, Mahashi (a tomato stuffed with beef and rice), rice, flat bread and a fresh green salad. The molokhia really reminds of a dish I've eaten before, but I don't know where. It's as if I see an actor on tv and recognize him, but don't remember from which movie. Frustrating! But Nejla tells me the dish is not only common in Sudan, but in Egypt as well. So probably I had some while visiting friends in Cairo last year.

I start out eating with a spoon, but Nejla is interested in how I eat with my hands. Of course, immediately I make the mistake of touching the food with my left hand. This is a big no-no. Mostly because your left hand is used for "toilet purposes", but according to some, because using the right hand is obligatory in Islam.
Also, your fingers should not really go in your mouth, this is not polite.
In the end, I spoon the food into pieces of bread and pop those in my mouth. The salad I eat with a fork though.

After the meal, we listen to Bob Marley on her computer and debate how he died exactly. I thought stomach cancer, Nejla thought lung cancer (from smoking too much?). So I look it up, and it turns out it was skin cancer that spread to his lungs and stomach. 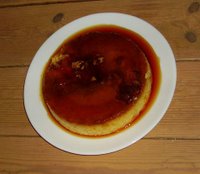 Over dessert (a delicious crème caramel) we talk about double standards for men and women in the Netherlands and in Sudan. As an example, I say: "Take a girl in high school who kisses another boy each week in the disco. This girl will be seen as a bit of a slut. But if it's a boy that kisses a different girl each week, he is seen as a stud!"
Nejla asks me:"But who will talk about her? Mostly her friends? Or the whole community?"
I answer: "Mostly just her friends and the people at school."

During the evening we talk about lots of different things, among others, that Nejla is devout and serious about her faith. However, she does believe that her faith is between her and the Almighty, and that other people do not have the right to judge her in this respect and tell her what to do. She does not tell other Muslims how they should practice their faith either. This is something personal.

Interesting...as we part, we are still in the middle of a discussion! About how many Northern Sudanese highly value their light skin and soft hair and feel Arabic, not African. Nejla admits that Arabic is her mother tongue, but still she feels more African. In general, she feels that people should not put so much weight on skin color and that no one should be judged by their ethnicity.

We go to into the elevator together, because Nejla is bringing the leftover crème caramel to a friend of hers on the tenth floor. By accident, she presses number 13, because her best friend lived on that floor before moving back to Sudan. Nejla still misses her a lot.
So, on the tenth floor, we kiss goodbye and I promise to invite her over to my place soon for a Dutch meal!