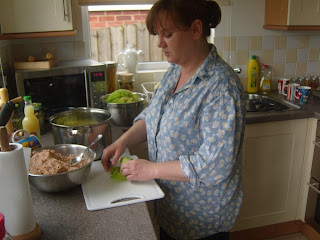 When I arrive at this cosy house in North Oxford for the Polish meal, it turns out the blog was checked out beforehand and lots of photos were made of all the preparations to help me 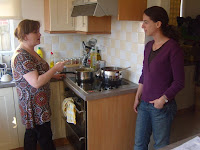 out. This allows me to relax and just chat to Jolanta about what Polish cuisine is like. She warns me:"It is delicious, but it is possibly the most difficult food in the world to digest!"
Possibly this is due to the large role cabbage plays in Polish dishes.
Our starter, the white s 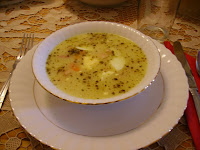 oup żurek (see picture), does not contain this vital ingredient. The main course, though, consists of stuffed cabbage (gołąbki) and bigos, which takes two days to prepare and has both normal and sour cabbage in it. It should normally be drunk with cold vodka!

The stuffed cabbage rolls are called 'pigeons' (due to a somewhat similar shape?) and have a lovely mince and rice filling. In the photo above you can see Yolanta preparing them. They are youngest daughter Zuzanna's favourite and she manages to finish at least four of them. Looking at her slim figure, I must assume that they aren't prepared that often!

Contrary to my prejudiced expectations, Darek (at right) actually did mos 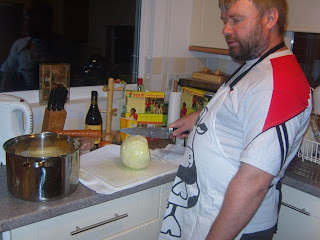 t of the cooking. He and Jolanta met when they were 16 and 13 and by now they've been married 18 years! Their cosy household is a warm haven for the (often single) young Poles who end up in Oxford for work or study.
Though they love everything about Poland (except the politicians), the economic insecurity meant that their move to the UK took away a lot of stress. As Jolanta succinctly puts it:"I no longer have to choose between buying food and paying the rent."
I am very impressed by how fluently she speaks English a 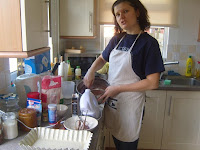 fter so few years here. She said she thought she spoke it while still in Poland, but could not understand a word people said in the UK when she just arrived. Incredibly, she is now well on her way to being an accredited interpreter.
Though at the moment she is still the senior ward housekeeper at the stroke unit in Oxford's major hospital: "Learning to follow what the stroke patients are trying to say is a bit like learning a new language; it is satisfying that I can understand them almost all the time by now."

The dessert after this lovely dinner is a spice cake prepared by Ewelina (at left) who helped me contact the family initially. A 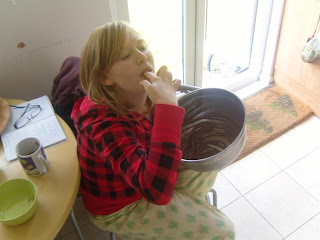 nother of Zuzanna's favourites (see below)!

We discuss how we would actually need a "Polish meal part 2" to include classic dishes as pierogi, borsht and cheesecake.

I'm up for it, and can confide that I had no digestive problems after this first copious meal...

Here is the recipe Jolanta emailed me to recreate the bigos at home. Be aware that it tastes best if prepared a few days in advance!