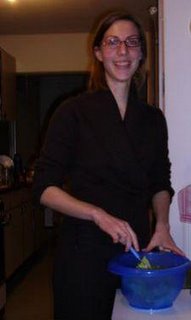 I've had quite a few dinners with Florence and her boyfriend Seb before, but these meals were usually Italian or Chinese...so tonight the French meal she is making is by special request. Somehow she (mistakenly) got the idea that this "trip around the world" is a competition, and she has taken pains to show that the French cuisine is indeed the best in the world!

We start off with delicious sausage with thyme and pepper, personally imported from Paris by Florence. She is a real Parisienne, but has lived in Germany for two years before moving to the Netherlands. Her knowledge of German helped her learn Dutch quickly, and many people are confused by her accent. They usually guess Belgian, and not French or German.
The saucisson is accompanied by red wine, which Seb cannot drink, because he is recovering from dengue fever. He contracted it in Sri Lanka, studying the language of the Malay who live there. So...being a linguist can be a dangerous profession. Florence studied law and never thought she would be working in the "language" field, but now she is a legal translator at the French Embassy in the Hague. She can't tell us that much about her new job, because the information is classified. Top secret...though one thing she can disclose is that she has a two hour long lunch break! In the Netherlands, half an hour is normal and one hour is quite long. But two hours--this is very French. 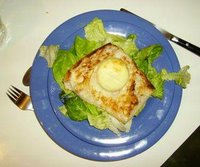 The sausage is followed by little goat cheeses on toast from the oven. I ask: "With honey?", because this is a combination I know and like, but it turns out it is not that popular in France. Somehow goat cheese with honey has become an inseparable entity in Dutch cafés and restaurants. When you order a salad or a sandwich with goat cheese, there's about 90% chance the dish will include honey. (Another fact: 87% of statistics are invented on the spot...)

Anyway, after we remove the small pieces of toast that are burnt, this first course is very good...the chèvre, called Crottin du Berry, has a delicate taste that I haven't come across before. 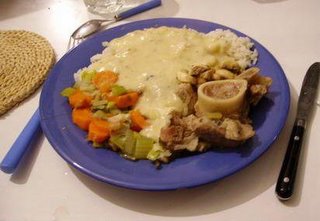 Now for the main course. This is a dish Florence's mother also used to make, called Blanquette de veau. Don't you agree almost everything sounds better in French? For example, Saumon au crème fraîche sounds nicer than Salmon with sour cream, right? I don't even know if this is an existing recipe...but blanquette de veau definitely is. Though it is usually made from calf's shoulder, Florence is making it with calf's leg. Front or back leg, we don't know, and even I, as a veterinarian, can't tell the difference between a tibia or a radius when the pieces are this small.
The stewed meat is accompanied by carrots with leak, rice, little mushrooms and a lot of white sauce (sauce blanche). I hardly know anyone my own age who makes sauces without the help of a store bought sauce mix. My student friends see it as a miracle that I make my own soup from scratch. "You mean you really made that pumpkin soup yourself? From pumpkins?"

But even I, the miracle soup maker, have never made my own sauce from butter and flour, the way it's supposed to be done. 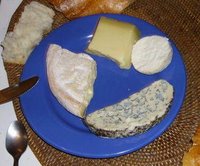 Then it is time for the cheese platter (plateau de fromage). Florence tells me her family always has cheese after dinner, and that the platter will contain a minimum of four kinds of cheese. These might be the same four cheeses for a while, but still-I am impressed!

To top off this magnificent meal, we have a light dessert: a refreshing and surprisingly good combination of thinly sliced red onion and juicy pieces of orange. That makes five courses! Seb asks me if I have weighed myself, so I can see the difference before I started the 80 meals and when I'm done.
Hmmm, no-but I guess I'll notice when my jeans don't fit anymore!