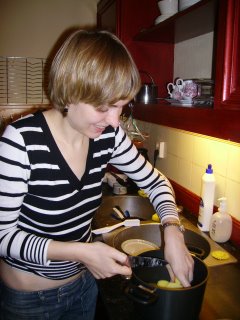 It's the first time I eat barščiai for this project, but not the first time I eat "borsht", an easier way to spell it in English. As you can see in meal 11, where it al revolves around my father's beetsoup.
Gintare (which means "amber" in Lithuanian) is preparing the soup as her grandmother always did it. This recently graduated sociologist does agree the barščiai she is making is similar to many other beetsoups around the world, though for example in Belarus they would add cabbage.
Secretly I am glad we are not eating another local specialty, smoked pig's ear, which is served as a snack with beer. While Gintare is preparing the potatoes, we sip on tea and gobble up some yummy chocolates she brought from home. She's only really lived in the Netherlands for a short time, but sometimes feels frustrated by the language and the bureaucratic procedures. Recently she was called by a girl, who had found Gintare's name through some list of expat Lithuanians. She called and explained her situation, and Gintare commiserated :"Oh yes, I know how you feel...", but then found out while she had only lived here for 2 months, this girl had lived here for over 3 years! 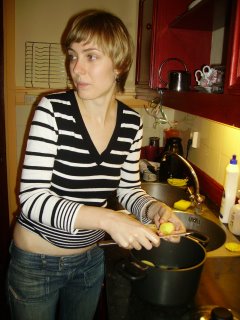 There aren't that many compatriots in Groningen, though she will also feel immediate bonding with Latvians, who speak almost the same (Baltic) language and have a similar culture.
I ask:"What about Estonians?", also a Baltic state, after all.
"Oh no! They are much more similar to the Finnish...a bit more reserved as well."
Well, that's good to know. I wouldn't be surprised if the Dutch were compared to the Flemish, but I would if they were deemed similar to the Germans.
I will ask the Latvian girl who will be cooking for me in December what her opinion is on the 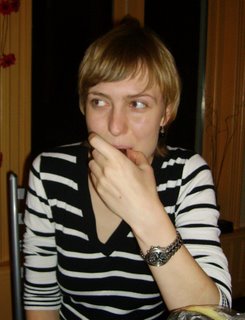 matter...
Vilnius (Lithuania) and Riga (Latvia) are now part of Europe and sadly, both are becoming popular destinations for Brittish "stag parties", involving drunk young lads looking for a cheap alcohol and pretty girls. They don't show too much appreciation for its beautiful baroque city centre.
I hope an advantage of joining the EU is an improvement in dental care. Gintare tells me a story about barbaric practices during her childhood including drilling in teeth without painkillers. She was so scared of the dentist she didn't go for seven whole years. At the end of this period, two 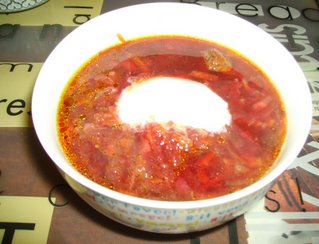 weeks of dental work were needed to repair the damage!
The soup is delicious, by the way...Gintare's grandmother would be proud.

The potatoes fried in butter with dill are served on the side and are such an easy and effective side dish, I promise myself to make it one day soon. I have to admit, for the borsht/barščiai I will use my own grandmother's recipe!

For those without these loyalty issues, try the Lithuanian version.