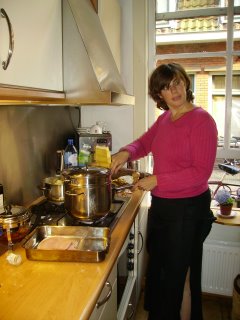 When I arrive at Laura's house in Leiden, I can already see her cooking through the kitchen window. As you can see in the photos, she has adopted the "typically Dutch" custom of leaving the curtains open which lets passers-by easily look in. Laura's parents, when visiting from Belgium, have laughed at this feature, as well as at the incredibly narrow and steep staircases used in this crowded country to save space.
The thing I notice most myself when entering Belgian Flanders by train is that the houses there seem a bit dirtier and less well-kept. But Laura, who is originally from Antwerp, tells me her impression is that as she leaves the Netherlands, she can start breathing. In Belgium, there is more space, 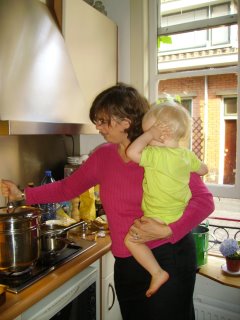 and more freedom in building styles. Funny how we have different interpretations of crossing a border!
While preparing the Flemish meal for tonight, Laura exhibits the art of "cooking with one arm", as her left arm is holding daughter Nandana. This typical image recalls the traditional role of the mother in the kitchen...but in fact, both Laura and her Dutch husband Alex have busy careers at Leiden University. Laura even praises Dutch men in general and Alex in particular for being quite emancipated. Her Belgian girlfriends, she smiles, are already impressed if their partners do the dishes...
During the cooking, Nandana is either held in Laura's arm, holding on to her skirt or playing with a jar of rice kernels on the countertop (a useful trick if you want two free arms to cook...).
Once the casserole of Belgian endives, Witloof, is "in den Oven", she is brought upstairs and put to bed. 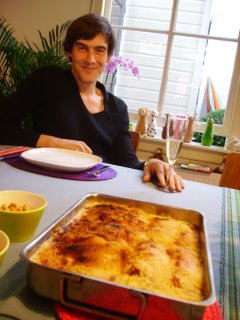 I enjoy a glass of champagne with Alex, and learn that this is a typical Belgian custom. In Holland, we only drink it to celebrate some special event, but there is common to drink it with an everyday meal. Laura praises the Vranken, an affordable, good quality brand "that made champagne accessible to all Belgians". Sadly it is unavaible here.
Though the Netherlands and Belgian Flanders used to be one country, there are quite a few differences in culture. After sixteen years of life in the Netherlands, Laura says a few of the things that come to mind are that Belgians seem a bit more "family oriented", are less direct/open (e.g. would not discuss toilet paper qualities over dinner) and don't talk about money as much as the Dutch!
The Witloof uit den Oven, Belgian endives rolled in ham and covered in cheese sauce before 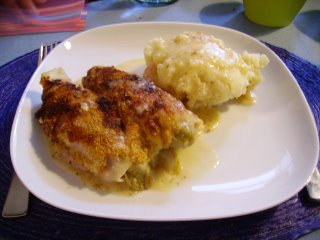 going in the oven, is served with a generous serving of mashed potatoes. It reminds me a lot of my own mother's traditional Dutch meals with Belgian endives...the two countries do share quite a few customs. Although Laura is greatly disappointed in the selection of potatoes in our supermarkets, they don't have the right ones to make French fries! Actually I should say Flemish fries or Belgian fries, as their thick variety is especially delicious, crisp on the outside and soft on the inside. There is even a whole website dedicated to Belgian fries, which traditionally are served with a good steak or mussels.
Laura herself is curious what the Walloon meal will be like...this region of Belgium where French is spoken is almost a separate country so certainly deserves a separate entry in this blog!

Here is the link for the recipe (quite easy to make!):
Flemish Witloof in den Oven